At the end of the Bronze Age and during the first years of the Iron one, there were two lines along which the Po flew into the sea: the Po di Adria in the north and Po di Spina in the south. The latter was more effective and over the years it split itself into two branches: Olana (then Po di Volano) and Padoa, also known as Eridano, from which the name Po was inspired. In that time, even when the weather conditions were particularly mild, there were many widespread swamp areas and lagoon basins, notably on the coast line. Around the year 1000 BC, some spits and the complex of Massenzatica dunes, an ancient proof of Po’s evolution, began to be shaped.

Between the IV and VI century BC, the ancient Etruscan city of Spina saw the day near the mouth of Po’s southern branch that was flowing through Codrea, Gambulaga e Ostellato. Back then, the most important branch of the river Po was Ferrara’s one, that by Codrea gave birth to more branches, notably the one towards Copparo (which engendered the birth of Volano) and especially the one towards Ostellato, probably the Padoa quoted by Polibio. 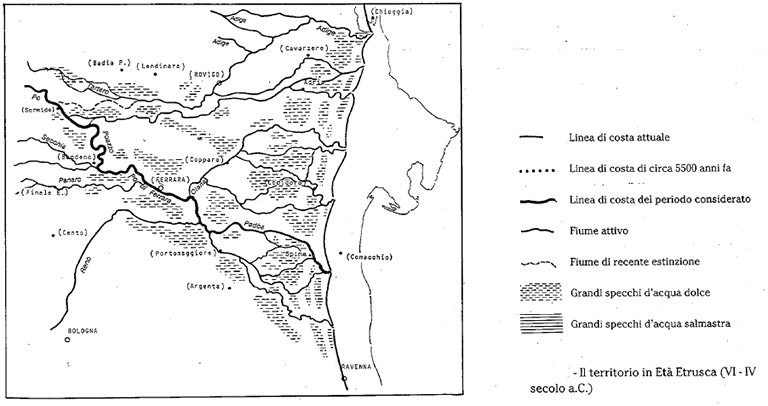 By the mouth of this last one, a wide delta platform began its development around the IV century BC covering the space between Ravenna and Comacchio and reached out to the sea for more than the 2-3 km from the current coast line. This hydrographical structure remained unchanged throughout almost the entire Roman era. 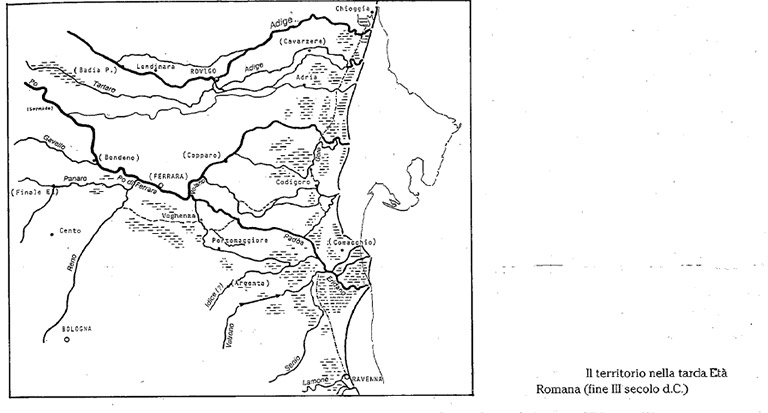 After the III century AD, heavy rains started to happen regularly and they led to some noticeable hydrogeological instability, which eventually amplified the diffusion of swamps. In this phase, the development of Massenzatica’s delta restarted with a fork of Volano and Gaurus (from pre-Latin gaura or gabura, which is channel or ditch), maybe already open in the Classical age.

By the end of Middle Ages, the most important river branches of the Po had been created near Volano and Primaro. In the point where they split themselves, the city of Ferrara saw the light. 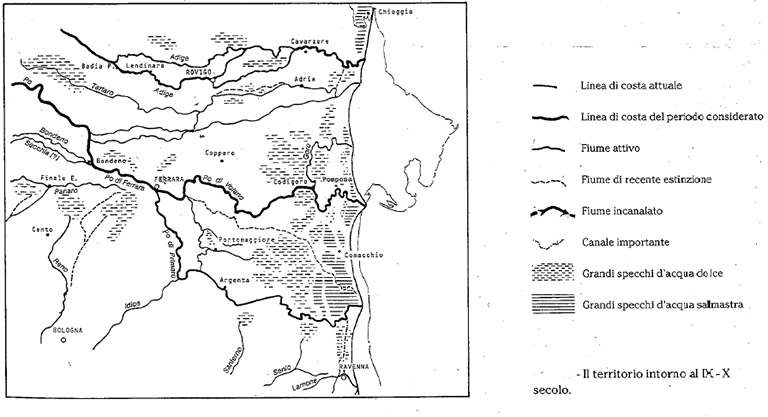 In the XII century, following a new wave of intense rains, the most significant historical disruption of the Po’s area and valley took place. A series of river courses, called Ficarolo courses, led Po waters to overflow into a riverbed, which is a close match with the current Po Grande or Po di Venezia. The outlet to the sea was located near Fornaci, northern from Donada, and a new delta cusp began to be shaped. In that time, the Po di Goro was supplied once again and then split near Mesola into two mouth branches: the one properly called of Goro, aiming north-east, and that of Abate, aiming south-west.

During the following centuries, it takes place a progressive loss of efficiency of the Po di Ferrara and of its branches of Volano and Primaro until the XVI century, where they reached their ultimate critical point. Meanwhile, the Po Grande, which was the most efficient one, gave birth to a complex delta platform. With the fear that the several sediments brought by the river to the most northern mouths could provoke the obstruction of the lagoon’s mouths, the government of the Republic of Venice decided to build a deviation of Po’s final part towards south-east. With this majestic work called “taglio di Porto Viro” or “taglio nuovo” realised between 1598 and 1604, the construction of modern delta by the river branches of Goro, Gnocca, Tolle, Pila and Maistra began to see the light. 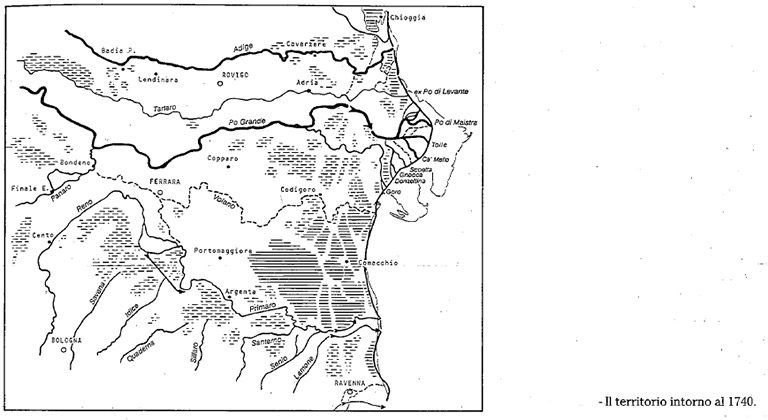 This new structure, together with a temporary worsening of the weather conditions, promoted the development of delta’s southern part dominated by the branches of Goro and Donzella. During the XVIII and XIX centuries, these branches engendered quite rapidly two relevant peninsulas in front of Ferrara’s coast while shaping two wide coves: the sacca di Goro and sacca degli Scardovari. After the flood of 1872, the Po di Pila became the main branch, while that of Maistra lost gradually its importance. Still today, the Po di Pila is the river branch with the highest capacity. 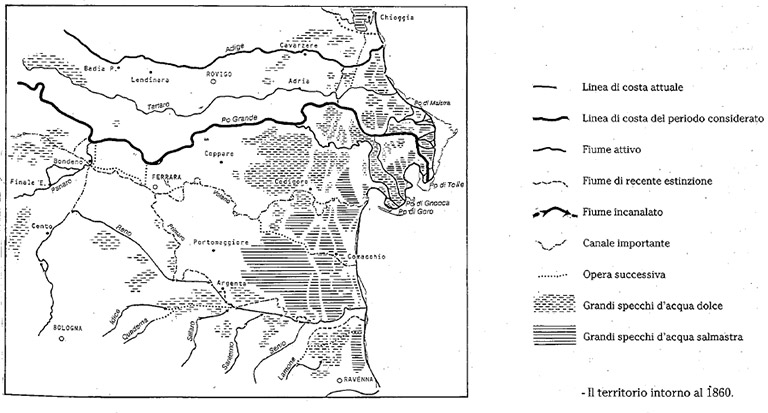 The evolution of the delta’s territory has been determined by several complex environmental events and, especially in the last centuries, by the humans’ footprint. It is actually defined as a natural delta as it was created by the river, but also as an anthropic delta, as it was shaped by the man.

Nowadays, the Po nurtures a delta that flows into the sea over some 25 km on a meridian arc of 90 km and covering a surface of some 400 km2.

At the delta, the river splits itself into 5 main branches that are, starting from the north: Po di Maistra, Po di Pila, Po di Tolle, Po di Gnocca and Po di Goro.

The Po’s delta area is rich of relevant natural elements: the riverbeds with their related islands, wetlands, sandbars and abandoned meanders, the river’s mouths, the coast with the dune camps, lagoons, salt marshes, salt flats, sweet water swamps and geological structures of high relevance and beauty. Throughout the area there are also several botanic and zoological enriching presences that are the most relevant values, traditions and heritages of man’s history.

Archaeological sites, churches, valleys, castles, Patrician villas and other historical buildings are the heritage of the civilisation that lived in this territory. Still today, salt mines, fishing buildings and structures, like fixed weirs or lodges are passing over the old professions and traditions of this territory. Here, wilderness, history, culture, tradition and art cross each other to offer to the visitors some unique and breath-taking landscapes.

Our location, the boarding point